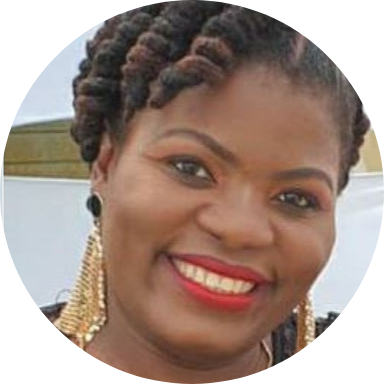 Zanele Dlamini is the current DREAMS Area Manager for BroadReach Health Development. She is based in Gert Sibande District in Mpumalanga and has spent the last seven years as a dedicated BroadReacher, empowering action and changing lives.

Zanele’s favorite value is we are collaborative, believing that our amazing achievements as a company happen because we constantly find ways to work together even though we are such a diverse group from different backgrounds. Have a read through her story below.

It seems like just yesterday that I was approached by a recruitment agency and asked to apply for a position at BroadReach. It was 2013 and I had never heard of the company, but after spending some time on their website, I felt inspired by their purpose and decided to apply. Little did I know what it would come to mean to me.

My interview was held in Joburg and it was my first time doing an interview via Skype (back then, Teams wasn’t a thing yet!). This was a little nerve-racking, but I didn’t let it pull me down and the interview seemed to go well. I was over the moon when I received my offer letter, with the opportunity to become the first non-clinical Facility Advisor. My 7 years of prior experience managing a specialized HIV clinic in the private sector, meant that I had the skills needed to train Operational Managers in my allocated facilities.

Fast-forward fifteen months and the company was restructuring. This was something we were used to in APACE and I accepted retrenchment with a heavy heart. As so often happens in life, the supposed setback ended up working in my favor.

I saw an ad for an internal post for sub-grant coordinator with BroadReach, and since I already knew and respected the company, I decided to apply. I had no choice but to take the interview in my car outside the Department of Health offices, afraid to reschedule in case I missed my chance. I was now comfortable with a remote interview, and once again, I felt it went well.

I was offered the position, and as a sub-grant coordinator, I worked with NGOs that were funded by BroadReach, guiding them on how to deliver the services they had signed up for. I discovered then that I needed to embrace being a learner by upskilling myself to carry out the job effectively. I asked questions, embraced diversity, and discovered new ideas, skills and knowledge. I’m not sure I would have been quite as driven or believed in myself quite as much, had I not been surrounded by so many incredible female leaders. Majority of our APACE leadership team was and still is female, and this was really inspiring to me. Not only that; they also pushed me to grow better every day, to eventually follow in their footsteps.

All my training got me interested in capacity building and I ended up forming a bond with the Regional Training Centre, where I got the chance to train DOH staff on different guidelines. There were two of us working as sub-grant coordinators, in-charge of multiple districts, which meant a lot of travelling to visit and monitor our NGOs. I clocked the most kilometers on the road that year, travelling a whopping 35 692km! The truly great part was that we were also called upon to represent BroadReach in partners’ meetings, provincial meetings and even at the National Department of Health. This confidence and trust in me by my managers inspired me to develop and grow even more.

My role transitioned to that of a Community Linkage Officer, where I worked on linking clients tested by community partners. This would eventually be linked to the Contact Centre, where we worked to keep HIV positive people in care. Vantage helped us to identify vulnerable people at risk of dropping off their care and our team worked to keep them in care, keeping in contact to ensure they kept to their appointments.

When COVID-19 hit in 2020, we were ready to pivot quickly to assist in tracking and tracing COVID-19 contacts – a life-saving role, particularly in the beginning of the spread. We worked long hours and all throughout the weekend, and often had to set up additional emergency centers if there was a sudden outbreak in our Districts. ​​​​​​​​​​​​​​

In this year, I was promoted twice. First, I was made a Community Specialist, and after 6 months was named the DREAMS Area Manager. The DREAMS initiative is a PEPFAR-funded program, implemented to prevent HIV/AIDS among teenage girls and young women. I am currently working in this role and am proud of the work we have already been able to do to educate young girls and women about HIV/AIDS.

The last 7 years have flown by, but at the same time, my growth and development has been enormous, both personally and within the organization. Throughout my journey as a BroadReacher, I have been continually inspired by our strong female leaders; their passion, dedication and unfaltering belief in themselves. They have taught, led and mentored me all along the way, inspiring me to be the best that I can be. They are a huge part of the success I have had so far in my career and I look forward to growing even more and playing a large part in the growth and development of the next generation of female BroadReachers.