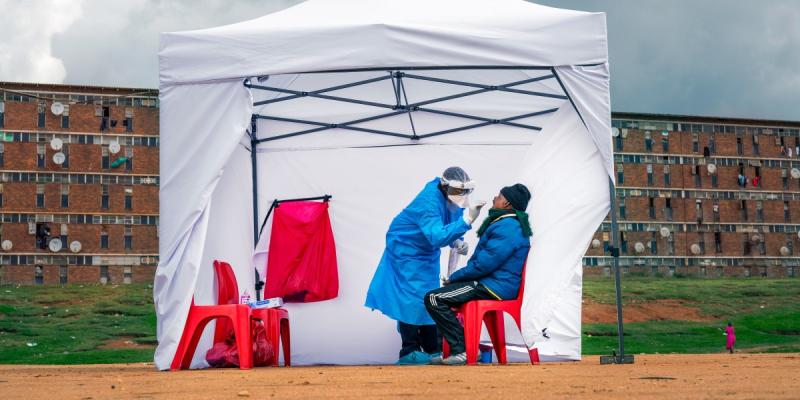 This article was originally published on MIT Technology Review.

Running a healthcare system is like juggling bees. Millions of moving pieces—from mobile clinics to testing kits—need to be in the right places at the right time. That’s even harder to do in countries with limited resources and endemic disease.

But getting stuff where it’s needed is a problem big companies deal with all the time. Now global healthcare groups are adopting some of their techniques: a number of the world’s poorer countries have started to use AI-powered supply-chain management tools to help people get better access to testing and treatment.

Healthcare organizations are using the software to help decide where to set up new clinics, how to allocate equipment and staff, and what spending to prioritize. And the same tools could soon end up helping to run health programs in the US, too.

Only 1% of clinics and 14% of hospitals in low- and middle-income countries have the equipment or staff they need to diagnose endemic diseases, such as HIV, tuberculosis, and malaria, according to a 2017 report in the Bulletin of the World Health Organization. A commission set up by the medical journal the Lancet in 2021 concluded that nearly half of the world’s population has limited or no access to testing services. Even when tests are available, the results are often inaccurate or come too late to be of clinical use.

Global health organizations have realized that if you zoom out far enough, these shortcomings start to look a lot like a supply-chain problem. “Why is it that Coca-Cola can deliver ice-cold cola to some of the most remote places in the world but we can’t do something similar in health care?” asks John Sargent, a doctor and co-founder of BroadReach Group. The health care delivery organization manages one of the world’s largest HIV care and treatment programs using AI software, including digital twins—tools that simulate complex processes by mirroring real-world resources such as goods, warehouses, and transport links. Machine learning algorithms can use these simulations to predict problems and propose solutions.

Over the last few years, companies across industries from retail to manufacturing have started using digital twins to weather the worst of the world’s ongoing supply-chain disruptions. “We wanted to step back and look at a country’s whole health care network,” says Heidi Albert, head of FIND South Africa. “That’s what led us to supply-chain thinking.” FIND (Foundation for Innovative New Diagnostics) is a nonprofit based in Switzerland. Testing is one of the weakest links in global health care, says Albert: “Our aim is to make sure that everyone who needs a test has access to one.”

That involves allocating a limited number of resources across an entire health care system, turning it into an optimization problem: how to make the most of what’s available. By modeling resources and the dependencies between them, digital twins identify gaps in a service, anticipate disruptions, and tweak the setup to explore various possible scenarios.

FIND is working with US-based Coupa, a business-management software vendor, to build a tool for optimizing testing services. Coupa has been adapting its business software called OptiDx for health care applications for the last four years. By using a range of computational techniques to model and analyze complex processes, including machine learning, its tools predict demand and identify optimal setups to meet it.

OptiDx is designed to use that technology to help health care managers, from government officials to nurses, allocate resources effectively, making sure that equipment and staff are in the best locations. By simulating increased demand in the digital twin of a country’s testing facilities, for example, the government can see what additional clinics and equipment it might need and tweak variables to explore hypothetical scenarios.

FIND and Coupa have already piloted the software in Zambia, Vietnam, Bangladesh, and Burkina Faso. In Zambia, the tool’s recommendations cut the average distance HIV test samples had to be transported to three miles—11 times less than before.

FIND is now rolling OptiDx out to 15 more countries, including Kenya, Lesotho, India, and the Philippines. In the Philippines the software has shown that one clinic could conduct the same number of tests with fewer instruments than expected, allowing the clinic to reallocate some of its budget.

FIND is monitoring whether the tool’s recommendations are useful as well as whether they are put into practice. “This needs to be something that countries can own themselves,” says Albert. “A key thing is to put the power of the data in the hands of the people [who] need to make the decisions.”

Catching up to smartphones

BroadReach uses a simulation tool called Vantage, built in partnership with Microsoft, to identify understaffed clinics and send health care workers where they are needed most. In 2020, during the first few weeks of the pandemic, BroadReach worked with FIND to assess how prepared two provinces in South Africa were for covid, flagging shortages in protective equipment and staff in more than 300 clinics in just three days.

Sargent says he learned about health care systems in Africa firsthand when working in refugee camps before he went to medical school. He later founded BroadReach with fellow doctor Ernest Darkoh, who grew up in Tanzania and Kenya. “You can go into rural clinics in places like Zambia, and you will see patient records sitting around on paper,” says Sargent. Yet the technology is there: “The nurses are using smartphones and Facebook is suggesting posts they might like.”

In addition to monitoring shortages, BroadReach tracks individual patients across more than a thousand clinics in several African countries, monitoring whether they are getting the treatment they need as well as continuing to follow it. Clinics already do that, but Vantage also uses machine learning, trained on hundreds of thousands of anonymized clinical records and social data, to identify people who are likely to drop out of treatment and suggest that health care workers check in with them proactively.

The Institute of Virology Nigeria used Vantage in 2021 to predict which of 30,000 people being treated for HIV across three sites in Nigeria were at risk of stopping their medication. The tool found that 91% of those who received a call or visit from a health care worker as a result were up to date with their medication, compared with 55% of those who had not been contacted.

According to BroadReach, health care workers at a number of HIV clinics have said that the tool helps them maintain closer relationships with their patients by helping them focus on those most in need of intervention.

BroadReach now wants to make its software available in the US. “Right around the time covid hit we sort of woke up to realize that a lot of quote-unquote developed-world health systems weren’t that great, and large swaths of the population were being left behind,” says Sargent.

BroadReach is involved in four pilot projects with US health care providers and insurers. In one, it tackled low rates of vaccinations in parts of Colorado by using machine learning to predict where vaccination sites should be set up and which communities should be canvassed. Local health officials had assumed that resources should be focused on urban areas to vaccinate as many people as possible. But Vantage revealed that focusing on low-income rural, minority communities would have a greater impact.

BroadReach is also working with an insurer in California that sees significant disparities in the way people in various groups keep to a treatment regimen of statins, drugs used to treat high cholesterol. By looking at the data, BroadReach wants to identify potential explanations for what the insurer is finding. Some communities have poor transport links to clinics, which may stop people from visiting their doctors to update prescriptions. Others simply have a longstanding distrust of the health care system, says Sargent.

Eventually he wants to see Vantage predict risk factors for individual patients. For example, for a Spanish speaker who does not live near a clinic, the software would recommend that the insurer provide a Spanish-speaking social worker and a voucher for a taxi, he says.

But it’s difficult to get hold of the data needed to train AI to make such predictions accurately. In the US, health care data is typically not shared between providers. Sargent says BroadReach is getting around this by combining medical records with socioeconomic data, such as people’s ZIP codes and credit histories. “We have partnerships with consumer data companies, because you can tell a lot about a patient if you know their patterns of behavior and what conditions they live in,” he says. “We stitch all of this together to get a view of an overall population and a view of each patient.”

How people feel about this kind of surveillance will depend on what benefits it actually brings them. A range of bodies—including credit companies, hiring agencies, the police, and more—already use the socioeconomic data BroadReach draws on to predict the likely future behavior of individuals. Biases in these systems have rightly led to strong pushback from civil rights groups.

Government proposals to share medical data in several countries have generated backlash, including in the US, the UK, and Australia, says Nicholson Price, who studies legal and ethical questions around the use of personal data at the University of Michigan. But that hasn’t stopped companies from combining medical and consumer data. “Companies have been doing this for several years, just at a lower profile,” says Price.

“There’s a sense of resignation that it’s happening and we appear to have no ability to stop it,” he says. “That said, maybe there’s a silver lining that some good stuff will come out of this, too, instead of just being advertised at and manipulated.”